This year is the 40th anniversary of Empty Bowl. Come celebrate with a weekend happy hour as Michael Daley, Judith Roche, and Tim McNulty share new readings with old friends. Emceed by Bob Rose, a noted environmental activist, board member of Skagit River Poetry Festival, and longtime friend of all three readers. 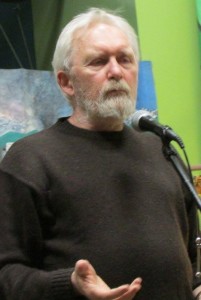 Michael Daley‘s poems and essays have appeared in American Poetry Review, The Hudson Review, Ploughshares, New England Review, North American Review, The Writer’s Almanac, Raven Chronicles, The Seattle Review, and elsewhere. He’s the author of four collections of poetry including Moonlight in the Redemptive Forest, and the translator of Lucia Gazzino’s Alter Mundus. His most recent book is Of a Feather. He is the founding editor of Empty Bowl Press.

Judith Roche is the author of four poetry collections, most recently All Fire All Water, from Black Heron Press. She won on American Book Award for Wisdom of the Body, which was also nominated for a Pushcart. She has published widely in various journals and magazines, and has poems installed on several Seattle area public art projects, including an installation at the Brightwater Treatment Plant in King County. She has written extensively about our Northwest native salmon and edited First Fish, First People, Salmon Tales of the North Pacific Rim (published by University of Washington Press and also and American Book Award winner), and has salmon poems installed at the Hiram M. Chittenden Locks in Seattle.

Tim McNulty is a poet, essayist, and nature writer based on Washington’s Olympic Peninsula. He is the author of ten poetry books and eleven books of natural history. Tim has received the Washington State Book Award and the National Outdoor Book Award among other honors. Tim’s newest book of poems, Ascendance, is published by Pleasure Boat Studio.