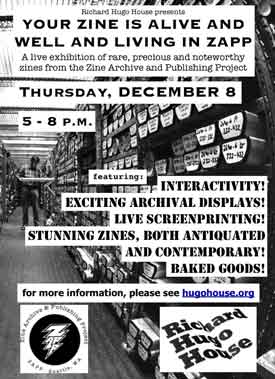 Your Zine is Alive and Well and Living in ZAPP is a live exhibition of zines from the ZAPP collection, featuring interactive installations, live screenprinting and many rare and historically significant zines, including “Spaceteer,” a rare sci-fi fan fiction zine from 1949; “The Art of Bunditsu,” an early collection of poems and illustrations by famed science fiction writer Ursula K. LeGuin; and “Choking on Sixth,” the first chapbook released by poet Jesse Bernstein.

Playfully spinning on the stark dogmas of museums and archives, expect fake security cameras and guards and protective reading tools designed to toy with the idea of preservation, a reminder of the importance of zines as a means of documenting alternative cultures across the country at a time before mass Internet connectivity.

Your Zine is Alive and Well and Living in ZAPP is free and runs December 8 – January 6 during Hugo House’s business hours with an opening party on December 8, 5-8 p.m. in conjunction with the Blitz Art Walk. The bar will be open serving drinks specials, and there will be a bake sale (with proceeds supporting the archive) and an area for current zine writers and artists to share, trade or sell their work.