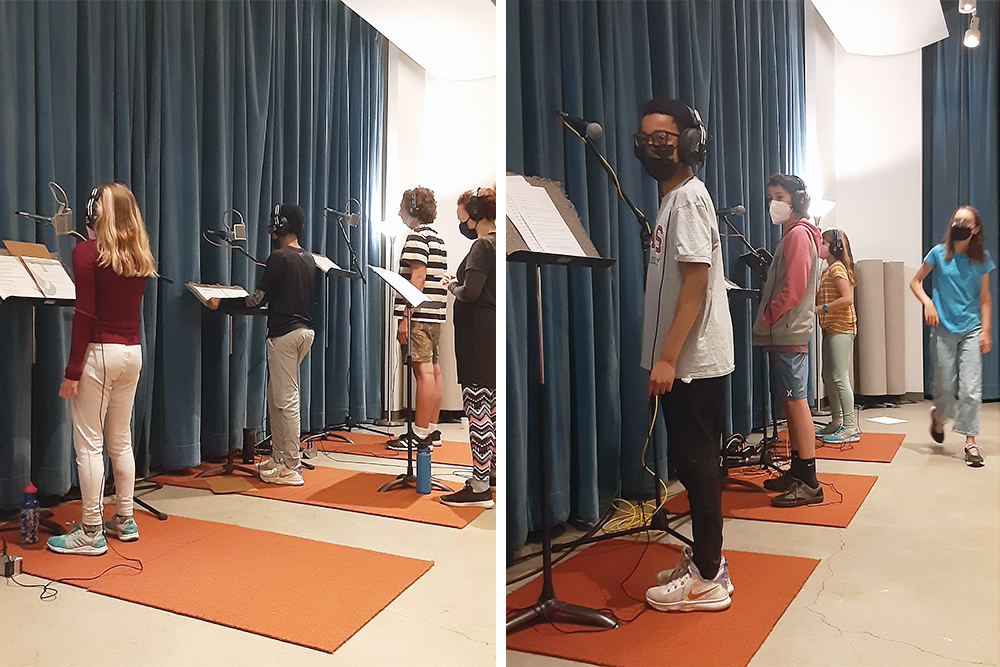 This summer’s Radio Drama Scribes camp, hosted in partnership between Hugo House and the Jack Straw Cultural Center, created space for students to utilize their creativity and collaboration skills to produce their very own radio drama inspired by the wildly popular fiction podcast Welcome to Night Vale. Students in 7th and 8th grade worked together to build a world for their drama, develop characters who live in that world, and write storylines for those characters. Students then collaborated to write a script for a news show in which all these characters appeared.

Writer and teaching artist Corinne Manning facilitated small groups, with each group writing a different segment of the news show. Guest artist Jekeva Phillips led a voice acting workshop. Students were either cast in a voice role and/or worked in sound tech, based on individual student interests. Voice actors continued to work with Meg McLynn, a vocal coach provided by Jack Straw, to develop their characters, while sound technicians got to work learning the ropes with Daniel Guenther, audio engineer and teaching artist. All students learned about how to create sound effects for radio (foley), and some students even created original music for the soundtrack, in addition to adding complementary sound effects found online.

We’re blown away by the final product produced by these students, Oil Rig 707, a radio drama in the form of a news show with a variety of segments updating the listeners on the recent events on the titular oil rig. These segments include character interviews, facilities & restaurant updates for those who live on the oil rig, a segment dubbed ‘Obituary Time’, plus a dramatic & emotional weather update full of similes about the human experience.

Creatively crafted and expertly constructed, Oil Rig 707 is a blast to listen to and even more fun to learn about the process that led to the end result! See what students had to say about this camp:

“I really enjoyed bonding with other people through the story we created.”

“I learned that I really like acting a lot more when I’m not acting live in front of an audience.”

“I had so much fun! Thank you for this amazing experience!”

“I made some friends and I liked recording the radio drama.”

What was most enjoyable? “The amount of things to do, and everyone was included. We were allowed to freely create our own world while having enough structure to complete it in a week 😊”