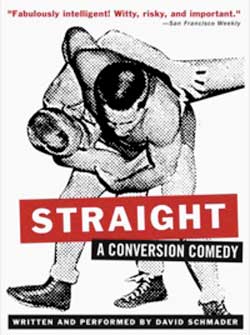 In “Straight,” Seattle writer and performer David Schmader explores the world of conversion therapy, the psychological and spiritual procedure by which homosexuals are reputedly made “straight.” With characteristic wit and intelligence, Schmader plunges into the heart of this highly charged territory—attending sessions with a German psychoanalyst, going undercover at “ex-gay” support groups and engaging in an intensive crash course in heterosexuality deep in the heart of Texas. Concurrently, Schmader casts an equally critical eye on the gay community, whose limitations at times seem to rival those of the conversionists. Throughout, Schmader blends an essayist’s insight with the spark of stand-up comedy to face difficult questions, avoid easy answers and get to the bottom of just what it means to be “straight.”

Tickets are $15 and are available at thestranger.com/straighttickets

“Beautifully written, with a stand-up’s ear for the absurd.” —Seattle Times

“Perfect. This is a stripped-down show with a script that sings. Schmader’s performance is a delight.”—San Diego Union Tribune 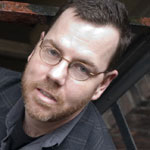 David Schmader is the Texas-born writer and performer who’s been living and working in Seattle since 1991. His solo plays include “Letter to Axl” and “Straight,” which he’s performed in Seattle and across the U.S., including productions at Los Angeles’ Highways Performance Space, San Francisco’s Theatre Rhinocerous, New York City’s Dixon Place, Columbus, Ohio’s Wexner Center of the Arts and Seattle’s Bumbershoot Arts Festival. In his spare time, Schmader is the world’s foremost authority on the brilliant horribleness of Paul Verhoven’s “Showgirls,” hosting annotated screenings of the notorious stripper drama at film festivals across the country and supplying the commentary track for MGM’s special-edition Showgirls DVD in 2002. Since 1999, Schmader’s been an editor and staff writer for the Seattle newsweekly The Stranger, for which he writes the weekly pop culture-and-politics column “Last Days.” He’s currently working on a new solo play, “A Short-Term Solution to a Long-Term Problem,” which will debut at Seattle’s Hugo House in September 2011.