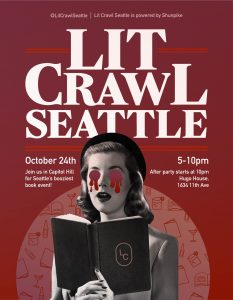 Sarah Galvin, Rich Smith, Corinne Manning, and Bill Carty turn the clock back to age 18, sharing work (new and old) that showcases the messes they are, were, and have been.

Sarah Galvin is a the author of Ugly Time, The Three Einsteins, and The Best Party of our Lives; contributor to the Guardian, Vice Magazine, The Stranger, and City Arts; and also a human bottle rocket. She has an MFA in poetry from the University of Washington.

Rich Smith writes about politics, books, and theater at The Stranger. He’s the author of Great Poem of Desire and Other Poems and All Talk, both from Poor Claudia.

Bill Carty is the author of Huge Cloudy (Octopus Books). He has received poetry fellowships from the Fine Arts Work Center in Provincetown, Artist Trust, the Hugo House, and Jack Straw. He was awarded the 2017 Emily Dickinson Award from the Poetry Society of America, and his poems have recently appeared in the Boston Review, Ploughshares, Pinwheel, Iowa Review, Conduit, Warscapes, and other journals. Bill is senior editor at Poetry Northwest and teaches at Hugo House, the UW Robinson Center for Young Scholars, and Edmonds Community College.

Corinne Manning is a prose writer and literary organizer whose debut story collection We Had No Rules is forthcoming from Arsenal Pulp Press, 2020. Their essays and stories have been published widely and most recently anthologized in Toward an Ethics of Activism and Shadow Map: An anthology of Survivors of Sexual Assault. Once Upon a time they founded the James Franco Review, a literary intervention project that addressed implicit bias in the publishing industry.