Internationally recognized poets Francisco X. Alarcón and Gabriella Gutiérrez y Muhs visit Hugo House for a reading. A prolific writer, Alarcón is an award-winning, bicultural and multilingual Chicano poet who writes for both children and adults. A multilingual, bicultural Chicana poet, Gutiérrez y Muhs recently represented the United States in India as one of the featured poets at the Kritya International Poetry Festival. 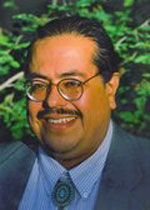 A prolific writer, Francisco X. Alarcón is an award-winning bicultural and multilingual Chicano poet who writes for both children and adults. Born in Los Angeles, California, he considers himself bi-national, having spent time as a child in both México and the United States. Mesoamerican mythology and cosmology, the Nahuatl language, Mesoamerican history, American culture and Chicano, Latino and gay identity are all portrayed in Alarcón’s writing. He is the author of ten collections of poetry, including “From the Other Side of Night / Del otro lado de la noche: New and Selected Poems” (2002), “Sonetos a la locura y otras penas / Sonnets to Madness and Other Misfortunes” (2001), “No Golden Gate for Us” (1993), “Snake Poems: An Aztec Invocation” (1992), “De amor oscuro / Of Dark Love” (2001) and “Body in Flames / Cuerpo en llamas” (1990).  On a Fulbright Fellowship to Mexico City in 1982, Alarcón discovered the writings of a Mexican priest (also named Alarcón) who had transcribed native songs during the Inquisition in the 1600s. Translations of the priest’s work, native songs and incantations, and Alarcón’s poems make up his collection “Snake Poems: An Aztec Invocation.” Alarcón has two books of poems published in Gaelic in Ireland. His most recent collection of poems, “Ce-Uno-One: Poems for the New Sun” (Swan Scythe Press 2010) includes poems in Nahuatl, English, Irish Gaelic and Spanish.

Alarcón received the 1984 Chicano Literary Prize, the 1993 American Book Award, 1993 PEN Oakland Josephine Miles Award and the 1984 American Book Award. In Aprill 2002 he received the Fred Cody Lifetime Achievement Award from the Bay Area Book Reviewers Association. He was one of the three finalists nominated for the state Poet Laureate of California in 2005 and has been selected again as a finalist for Poet Laureate on June 2008.

Alarcón currently serves as director of the Spanish for Native Speakers Program at the University of California at Davis. 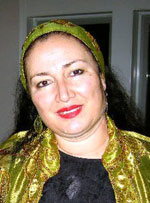 Gabriella Gutiérrez y Muhs is a multilingual, bicultural Chicana poet and educator. She is the daughter of migrant workers and grew up in México and the United States. A poet since childhood, she published first in France at 18. In 2000 she received her doctorate from Stanford University and joined the faculty at Seattle University. Her academic research focuses on Chicana subjectivity. She teaches in the Modern Languages and Women Studies Departments. She is currently also editing “Rebozos de Palabras: An Helena María Viramontes Reader” and co-editing “Presumed Incompetent: The Intersections of Race and Class for Women in Academia.”

Gutiérrez y Muhs has published poetry and academic works in various magazines and journals and is the winner of the prestigious Calabash Award in the Ethnic Arts for her work as a writer in California. There she conducted poetry workshops for women working in the local canneries, plant nurseries and agricultural fields. Gutiérrez y Muhs has held hundreds of poetry readings, keynote speeches and motivational talks, nationally and internationally.

Her poetry has been taught in France, Spain and Mexico and her first book, “The Plastic Book” is a CD ROM. Her second collection of poetry “A Most Improbable Life” was published by Finishing Line Press in 2003.  It was nominated for two prestigious awards: Kate Tufts and Lenore Marshall. Poet Maude Meehan commented on Gabriella’s work saying that “In her poetry words and images are often presented in a humorous vein. But even as we laugh, there is a subtle ache within. An ache of recognition of the painful truths of the human condition.”

Gabriella Gutiérrez y Muhs recently represented the United States in India as one of the featured poets at the Kritya International Poetry Festival. Her latest collection of poetry “¿How Many Indians Can We Be?” addresses issues of colonization, immigration, indigeneity, post-colonialism and identity from a transnational feminist perspective. Gutiérrez y Muhs currently serves as Director of Latin American Studies and the Diversity, Citizenship and Social Justice Track at Seattle University.