RSVP at the “Tickets” link to join the Zoom conversation, or find us streaming on Facebook Live. 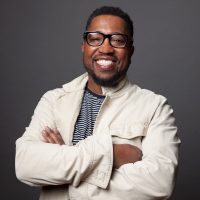 Major Jackson is the author of five books of poetry, including The Absurd Man (2020), Roll Deep (2015), Holding Company (2010), Hoops (2006), and Leaving Saturn (2002), which won the Cave Canem Poetry Prize for a first book of poems. His edited volumes include: Best American Poetry 2019, Renga for Obama, and Library of America’s Countee Cullen: Collected Poems. A recipient of fellowships from the Fine Arts Work Center in Provincetown, Guggenheim Foundation, National Endowment for the Arts, and the Radcliffe Institute for Advanced Study at Harvard University, Major Jackson has been awarded a Pushcart Prize, a Whiting Writers’ Award, and has been honored by the Pew Fellowship in the Arts and the Witter Bynner Foundation in conjunction with the Library of Congress.

Ed Pavlic’s eleventh book is Let It Be Broke (Four Way Books, 2020). Another Kind of Madness: A Novel (Milkweed Editions) appeared in paperback in 2020. His next book is Outward in Larger Terms: Adrienne Rich’s Expanding Solitudes, A Radical Geography (University of Minnesota Press, 2021). He is distinguished research professor of English, African American studies and creative writing at the University of Georgia.