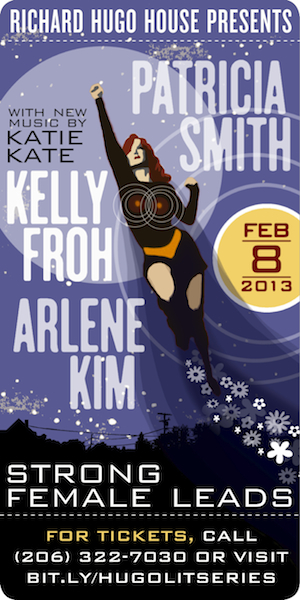 Seinfeld, Star Wars, anything written by Ernest Hemingway—these classics of television, film and literature all fail the Bechdel Test, a method of determining gender bias that originated in Alison Bechdel’s “Dykes to Watch Out For” comic strip, by portraying women as man-obsessed accessories. With few exceptions, popular books, movies and TV are awash with gender stereotypes in which strong women become bitches as quickly as the press calls for Hillary Clinton to ditch her infamous scrunchie. There are female characters that don’t revolve around the whims of men in their lives, like Buffy the Vampire Slayer, Foxy Brown or Katniss Everdeen—but would each be taken seriously if they weren’t armed? What is it about Strong Female Leads that scare some of us—and why must they often carry a weapon to do so? Can you create female-driven narratives that will pass the Bechdel Test without killing someone in the process?

Patricia Smith, lauded by critics as “a testament to the power of words to change lives,” is the author of six acclaimed poetry volumes. “Blood Dazzler,” which chronicles the devastation wreaked by Hurricane Katrina, was a ﬁnalist for the 2008 National Book Award. She is currently at work on “Shoulda Been Jimi Savannah” (Coffee House Press, April)—a memoir written in formal verse—and the young adult novel “The Journey of Willie J.” Smith’s previous book, “Teahouse of the Almighty,” was a National Poetry Series selection and winner of the ﬁrst-ever Hurston/Wright Award in Poetry. Her other poetry books are “Close to Death,” “Life According to Motown,” and “Big Towns, Big Talk.” She is the winner of the Chatauqua Literary Journal Award in poetry and a Pushcart Prize for the poem “The Way Pilots Walk.”

Kelly Froh is a cartoonist, zinester and co-founder of Short Run small press fest, which formed in 2011 and will be an annual festival. She has an art degree from Emily Carr University of Art & Design in Vancouver, BC. She has made many mini-comics and zines including a 7-issue series called “Slither,” which details going back to school at age 28 and moving to Canada, and “Stew Brew,” which, in collaboration with Max Clotfelter, was nominated for an Ignatz award for “Best Mini-Comic” in 2009. She is most known for autobiographical comics but has lately turned pen and ink on her relatives, seniors, co-workers and zoo animals. She moved to Seattle via a one-way train from Milwaukee, WI in 1994. She has been making comics since 1999 when she was introduced to the work of John Porcellino and Julie Doucet. Check out her website: www.kellyfroh.blogspot.com

Arlene Kim is the author of the poetry collection “What have you done to our ears to make us hear echoes?” published by Milkweed Editions, and her work has appeared in diode, Blackbird, DIAGRAM, Terrain.org, SPLIT, Cha, DMQ Review, cant, Switched-on Gutenberg and on Seattle’s NPR station as part of the KUOW Presents show. In 2012, Poets and Writers selected Arlene as part of their annual debut poets series. Arlene received a BA in literature from Brown University and an MFA in poetry from the University of Minnesota where her work won the 2007 Academy of American Poets James Wright Prize. Currently, she is the associate poetry editor for DMQ Review.

Seattle-based hip-hop producer, MC and classically trained composer and musician Katie Kate released her debut album “Flatland” in 2011. She’s a member of the hip hop crew Out for Stardom as well as the Gamelan Pacifica ensemble in Seattle. Katie Kate studied flute, gamelan, chamber music and classical piano at Seattle’s Cornish College of the Arts. In 2011, she was shortlisted for The Stranger’s Genius Award in music.