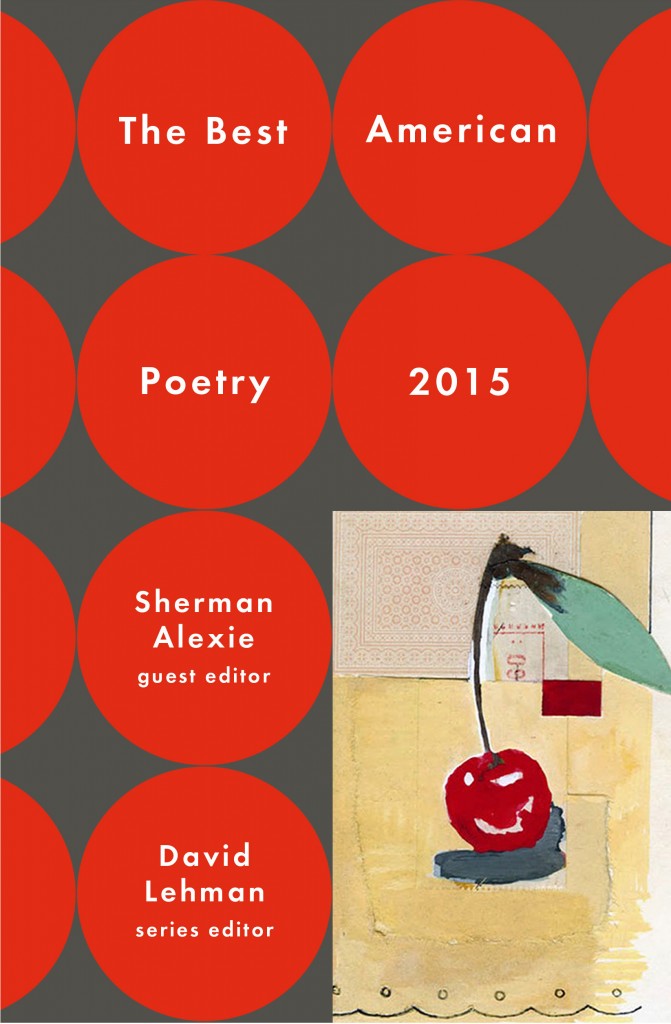 Join us for the exclusive Seattle book launch for the premier anthology of contemporary American poetry. The 2015 edition marks an exceptional volume guest edited by award-winning novelist and poet Sherman Alexie, who will also host the event. Readers include poets Natalie Diaz, Joan Kane, Ed Skoog, Cody Walker, and Jane Wong. Alexie picked seventy-five poems for the anthology, which highlight the depth and breadth of the American experience.

Natalie Diaz was born in the Fort Mojave Indian Village in Needles, California. She is Mojave and an enrolled member of the Gila River Indian community. She earned a BA from Old Dominion University, where she received a full athletic scholarship. Diaz played professional basketball in Europe and Asia before returning to Old Dominion to earn an MFA. She is the author of the poetry collection When My Brother Was an Aztec (2012), which New York Times reviewer Eric McHenry described as an “ambitious … beautiful book.” Her honors and awards include the Nimrod/Hardman Pablo Neruda Prize for Poetry, the Louis Untermeyer Scholarship in Poetry from Bread Loaf, the Narrative Poetry Prize, and a Lannan Literary Fellowship.

Joan Kane is the author of The Cormorant Hunter’s Wife, Hyperboreal, and The Straits, for which she has received the Whiting Writer’s Award, the Donald Hall Prize in Poetry, an American Book Award, the Alaska Literary Award, and fellowships from the Rasmuson Foundation, the Native Arts and Cultures Foundation, and the School for Advanced Research. Kane graduated from Harvard College and Columbia University’s School of the Arts. Inupiaq with family from King Island and Mary’s Igloo, she raises her sons in Anchorage, Alaska, and is MFA faculty at the Institute of American Indian Arts in Santa Fe, New Mexico.

Poet Ed Skoog was born in Topeka, Kansas. He earned an MFA from the University of Montana. His collections of poetry include the chapbooks Toolkit (1995) and Field Recording (2003) and the full-length volumes Mister Skylight (2009) and Rough Day (2013). Skoog’s work is noted for its wild lexicon and leaping intelligence. The Harvard Review compared Skoog’s work to that of Wallace Stevens and the New York School poets, noting his “verbal montages.” Reviewer Henry Hughes added, “readers must surrender their demands for whole meaning in the narrative sense to enjoy the verbal play—the sounds, phrases, and crazy connections that suggest new ways of reading the world.” Skoog has taught at the Idyllwild Arts Foundation in Idyllwild, California, the New Orleans Center for Creative Arts, and Tulane University. He has been the Jenny McKean Moore Writer in Washington at George Washington University and writer-in-residence at the Richard Hugo House.

Jane Wong holds an MFA from the Iowa Writers’ Workshop and is a former U.S. Fulbright Fellow and Kundiman Fellow.  She is also the recipient of scholarships to the Bread Loaf Writers’ Conference, the Squaw Valley Community of Writers, and the Fine Arts Work Center in Provincetown. Currently, she teaches literature and poetry at the University of Washington and the Richard Hugo House. In the fall, she will be a PIP Teaching Fellow at UW Bothell. The recipient of Meridian’s 2013 Editors’ Prize, poems have appeared in journals such as CutBank, Hayden’s Ferry Review, ZYZZYVA, Mid-American Review, The Volta, Salt Hill, The Journal, and the anthologies Best American Poetry 2015 (Scribner), Best New Poets 2012 (The University of Virginia Press) and The Arcadia Project: North American Postmodern Pastoral (Ahsahta Press). Her chapbooks include: Dendrochronology (dancing girl press), Kudzu Does Not Stop (Organic Weapon Arts), and Impossible Map (Fact-Simile). She is the author of OVERPOUR, which is forthcoming in 2016 (Action Books).

Cody Walker is the author of Shuffle and Breakdown (Waywiser, 2008) and the co-editor of Alive at the Center: Contemporary Poems from the Pacific Northwest (Ooligan, 2013). His poems have appeared in The Yale Review, Parnassus, Slate, Poetry Northwest, and Salon; his essays have appeared online in The New Yorker and The Kenyon Review. His second poetry collection, The Self-Styled No-Child, will be published by Waywiser in 2016. He lives with his family in Ann Arbor and teaches at the University of Michigan.

A leading figure since his breakout poetry collection The Business of Fancydancing in 1992, Sherman Alexie won the National Book Award for his novel The Absolutely True Diary of a Part-Time Indian. He describes himself as “lucky enough to be a full-time writer” and has written short stories, novels, screenplays, and essays—but he is at his core a poet.