In 2020, she sets free Black Imagination—Black Voices on Black Futures (McSweeney’s, 2020). Part oral history, part poetry, all imagination, Marin gathers thirty-six essential voices in this collection, which we’ll be celebrating this evening with readings from the book and thought-provoking conversations between curator and contributors.

Please RSVP for a free ticket. 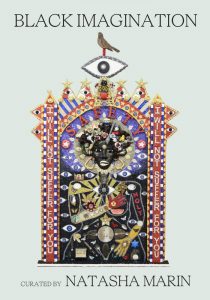 “Witnessing is sacred work too. Seeing ourselves as whole and healthy is an act of pure rebellion in a world so titillated by our constant subjugation,” reflects viral curator Natasha Marin on Black Imagination. This dynamic collection of Black voices works like an incantation of origin, healing, and imagination. Born from a series of conceptual art exhibitions, the perspectives gathered here are nowhere near monochromatic. Each insists on their own variance and challenges every reader to witness for themselves that Black Lives (and Imaginations) Matter.

Natasha Marin is a conceptual artist whose people-centered projects have circled the globe and have been recognized and acknowledged by Art Forum, the New York Times, the Washington Post, the LA Times, and others. In 2018, Marin manifested Black Imagination: The States of Matter, The (g)Listening, and Ritual Objects—a triptych of audio-based, conceptual art exhibitions in and around Seattle, WA. Black Imagination is community-based, ongoing and continues to amplify, center, and hold sacred a diverse sample of Black voices including LGBTQIA+ black youth, incarcerated black women, black folks with disabilities, unsheltered black folks, and black children. Marin’s viral web-based project, Reparations, engaged a quarter of a million people worldwide in the practice of “leveraging privilege,” and earned Marin, a mother of two, death threats by the dozens. This is how she healed herself. + www.black-imagination.com