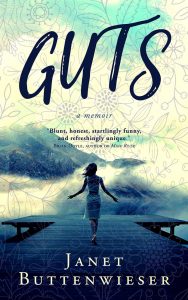 At age 24, Janet Buttenwieser—writer and Hugo House instructor—moved to Seattle with a resume devoted to public service and fantasies of single-handedly ending poverty. But within a year, she’d developed an intestinal illness so rare, she wound up in a medical journal. GUTS (Vine Leaves Press) is the story of navigating misdiagnoses, multiple surgeries, and life with a permanent colostomy.

Janet’s model for assertiveness was her friend Beth. Throughout Janet’s illness, Beth took care of her; then she developed brain cancer and their roles reversed. Eventually Janet recovered, but Beth’s condition worsened. At the age of 38, Beth died. To cope, Janet competed in endurance events, becoming a triathlete with a colostomy pouch.

With themes that echo Susannah Cahalan’s Brain on Fire and Gail Caldwell’s Let’s Take the Long Way Home, GUTS is a story of resilience for the millions of Americans who manage to thrive while living with a chronic condition, as well as the many who’ve lost a loved one at a young age.

Janet will read selections from the memoir, followed by an onstage Q&A with Elizabeth Austen. Hugo instructor and writer Stephanie Barbé Hammer will emcee and books will be for sale from Elliott Bay Book Company.

“Blunt, eloquent, piercing, honest, witty, heart-aching, startlingly funny, and beautifully, refreshingly unique. Can you read a book about pain while grinning and trying not to cry and not being able to think of a single book that’s anything like it? Yup. This one.” — Brian Doyle, author of Mink River

“You’ll be hooked from the very first scene, intrigued by the story’s promise: a woman’s decisive, tenacious journey through illness and loss. This book is about friendship, family, and the challenge to accept—and survive—the events in our lives beyond our control.” — Nicole Hardy, author of Confessions of a Latter-day Virgin

Janet Buttenwieser‘s work has appeared in The Rumpus, Under the Sun, Potomac Review, The Pinch, Bellevue Literary Review, and elsewhere. Her memoir, GUTS (Vine Leaves Press) was a finalist for the University of New Orleans Publishing Lab Prize. She lives in Seattle with her family and holds an MFA from the Northwest Institute of Literary Arts. Janet has raced eight triathlons since her colostomy surgery in 2004.