Celebrate the launch of Kevin’s new novel Any Second, a gripping story of two Seattle teens—Eli, who has been sent into a mall with a bomb strapped to his chest, and Maya, the girl who stops him—as they navigate the harrowing aftermath of trauma recovery, and the specter of a copycat attack.

Praise for Any Second:

“A moving read that will keep readers up late into the night.” —Kirkus Reviews

“An engrossing story of familiar pains and uncanny redemptions.” —Booklist 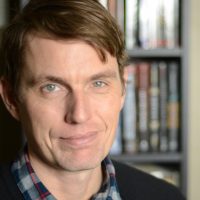 A former teacher at Hugo House and with Writers in the Schools and BFI, this is Kevin Emerson‘s 18th novel. His most recent title, Last Day on Mars, received multiple starred reviews and appeared on numerous state and national reading lists.