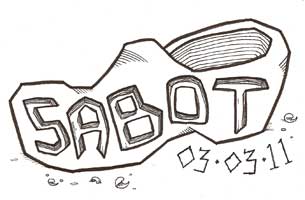 The Luddites were textile workers in early 19th century Britain that rebelled against the industrial revolution by smashing the mechanized looms that were putting them out of work. The term has, of course, come to be identified with those who take a rebellious stance against technology.

Expect lively, do-it-yourself mayhem and audience participation in this event meant to highlight the beauty and eccentricity of the hand-made and primitive.

The event is free and open to the public, technophiles and Luddites alike.

About the Artists
Maré Odomo is most well-known for his pokémon fan-comics “Letters To An Absent Father.” In 2010, he graduated from Cornish College of the Arts with a BFA in Visual Communication. He is available for freelance illustration, commissions and cat-sitting, even though he’s allergic. mareodomo.com

Evan J. Peterson teaches for Seattle area colleges, Richard Hugo House, and (soon) Bent writing institute. He reviews books for TheRumpus.net and the Southeast Review. His work and blog may be found linked up at Poemocracy.blogspot.com .

Gaeyln Woltz is an illustrator living in Seattle with her husband and their cats.  Sometimes they combine their powers and become Small Horse Studio: a collaborative design team.  In the past she has worked on gig posters, album art and apparel, among other endeavors.  She looks forward to working more independently and collaboratively and is inspired by all the natural world, the Pacific Northwest, and lovely love.

Martine Workman is an artist and designer living in Seattle, WA. She has drawn and bound many mini-books and has worked with Little Otsu, Poketo, the documentary ‘Roll Out Cowboy,’ and the European boutique Mais il est où le soleil?

Because ZAPP’s request for this biography was sent electronically, Jonathan Horn was unable (or unwilling) to respond.