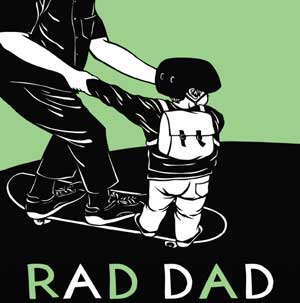 Today, more than ever, fatherhood demands constant improvisation, risk and struggle. With grace and honesty and strength, writers in “Rad Dad,” edited by Tomas Moniz, author of the popular zine of the same name, tackle all the issues that other parenting guides are afraid to touch: the brutalities, beauties and politics of the birth experience, the challenges of parenting on a equal basis with mothers, the tests faced by transgendered and gay fathers, the emotions of sperm donation and parental confrontation with war, violence, racism and incarceration.

“Rad Dad: Dispatches from the Frontiers of Fatherhood” combines the best pieces from Moniz’s award-winning zine, “Rad Dad,” and from the blog, Daddy Dialectic, two kindred publications that have tried to explore parenting as political territory.

Moniz celebrates the publication of “Rad Dad: Dispatches from the Frontiers of Fatherhood” on Thursday, August 4, at 7 p.m. at Richard Hugo House, joined by fellow writers Corbin Lewars, author of “Creating a Life: The Memoir of a Writer and Mom in the Making” and the popular zine, “Reality Mom”; Jennifer Munro, author of “The Erotica Writer’s Husband & Other Stories”; and Maré Odomo, a cartoonist and illustrator who is also the author of the Pokémon fan-comic called “Letters to an Absent Father.”

The bar will be open, and book sales will be for sale. The reading is FREE.

About the Readers
Tomas Moniz is the founder, editor, and a writer for the award-winning zine Rad Dad. He has helped raise three children and has been making zines since the late nineties. He teaches basic skill classes at Berkley City College and works with the National Writing Project.

Corbin Lewars is the author of “Creating a Life: The memoir of a Writer and Mom in the Making,” which was nominated for the 2011 PNBA and Washington State book awards. After eight years of publishing the zine “Reality Mom,” she recently closed shop to focus on other writing projects. When she told friends it felt akin to sending her first born off to college, they said, “You’re the one going and this time you (hopefully) won’t just focus on the bongs and kegs.” Corbin’s essays have been featured in over twenty-five publications and several anthologies. She currently writes for the Ballard News Tribune and the Seattle PI. She holds a Master’s in Education and teaches writing at Richard Hugo House.

Maré Odomo is a freelance illustrator and cartoonist. He made a Pokémon fan-comic called “Letters to an Absent Father.” More at mareodomo.com