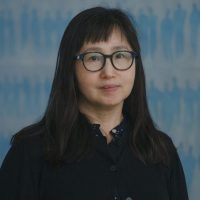 The multilayered works of National Book Award-winning translator, poet, and essayist Don Mee Choi are known for holding history accountable. Her most recent book, DMZ Colony is described as “a tour de force of personal and political reckoning set over eight acts.”

As a storyteller, Choi often weaves together poems, prose, photographs, and drawings to create a palimpsest of voices that further intertwine. In these fertile overlaps, Choi creates space for these voices to converse and to question truth, fact, and imagination.