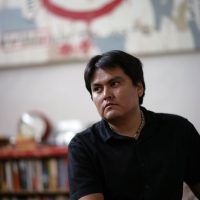 Sherwin Bitsui is the author of three collections of poetry, Dissolve, Flood Song, and Shapeshift. He is the recipient of a Whiting Award, an American Book Award, and the PEN Book Award. His poems have appeared in Narrative, Black Renaissance Noir, American Poet, the Iowa Review, LIT, and elsewhere. He is Diné of the Todí­ch’ii’nii (Bitter Water Clan), born for the Tlizí­laaní­ (Many Goats Clan), and has received fellowships from the Lannan Foundation and the Native Arts & Culture Foundation. 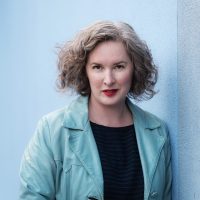 Elee Kraljii Gardiner is the author of Trauma Head, winner of the Fred Cogswell Poetry Prize; and serpentine loop. She has also edited two anthologies, Against Death: 35 Essays on Living and V6A: Writing from Vancouver’s Downtown Eastside. Elee is the founding director of Thursdays Writing Collective, which supported emerging writers from Vancouver’s Downtown Eastside. She has performed her poetry at festivals across North America, including the Vancouver Writers Fest, the Railroad Reading Series, and the Annual Creative Writing Conference at the University of Chiang Mai. Originally from Boston, Elee now lives with her family in Vancouver on the traditional and unceded territories of the Squamish, Tsleil-Waututh, and Musqueam peoples.