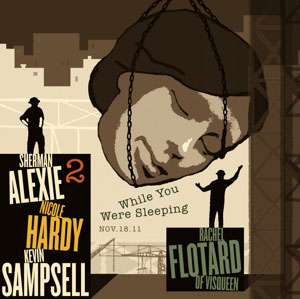 Commissioned by Richard Hugo House as part of the 2011-2012 Hugo Literary Series, National Book Award winner Sherman Alexie; poet and memoirist Nicole Hardy; and Portland author and publisher Kevin Sampsell debut new writing that reveals what happens in the dead of the night, with new music by Rachel Flotard of Visqueen.

TICKETS ARE SOLD-OUT, but very limited rush tickets may be available at the door. Please come at 6:30 p.m. and put your name on the wait list.

The Writing Prompt for While You Were Sleeping

When our heads hit the pillow, we allow our bodies to restore themselves—cells regenerate, tissues re-grow, bones and muscles are repaired—so the effects of sleep deprivation can range from a few yawns to full-on psychosis. The heavy sleepers among us can make it through earthquakes without stirring, yet even the lightest sleepers take a break from the ever-turning world for a little shut-eye. But does that stop us from sometimes wondering, at our moments of dwindling consciousness before the sheep come out to play, what might happen during the coming hours? Are the locks on the windows burglar-proof? Why hasn’t he answered his phone tonight? What happens to us in the dead of the night when we’re at our most vulnerable? And what dramas does Mr. Sandman bring our dreams when we’re catching the most z’s? 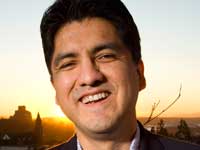 Sherman Alexie, a Spokane/Coeur d’Alene Indian, was born in 1966 on the Spokane Indian Reservation in Wellpinit, Washington. He is the author of numerous books of poetry and fiction, including “Face,” “One Stick Song,” “Flight,” “Ten Little Indians,” “The Toughest Indian in the World,” “Reservation Blues,” which won the American Book Award, and “The Lone Ranger and Tonto Fistfight in Heaven,” winner of the Hemingway Foundation/PEN Award. He is also the author of the young adult novel, “The Absolutely True Diary of a Part-Time Indian,” winner of the National Book Award. Among his other honors and awards are poetry fellowships from the Washington State Arts Commission and the National Endowment for the Arts and a Lila Wallace-Reader’s Digest Writers’ Award. He has also received the Stranger Genius Award, a Boston Globe–Horn Book Award, a Pushcart Prize, the PEN/Malamud Award and a citation as “One of 20 Best American Novelists Under the Age of 40” from Granta magazine. In addition to writing, Alexie is an accomplished stand-up comedian, public speaker and film director. 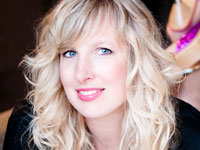 Nicole Hardy is the author of the poetry collections “This Blonde” and “Mud Flap Girl’s XX Guide to Facial Profiling,” which was published in Main Street Rag’s 2006 Editor’s Choice chapbook series. She is a Pushcart Prize nominee whose work has most recently appeared in The New York Times, ellipsis, Nimrod and Sanskrit. Her memoir “Fallen: Memoirs of a Latter Day Virgin” is due out from Hyperion in 2013. She often reads alongside Seattle band Willow and the Embers, with whom she plays the tambourine. 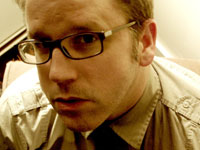 Kevin Sampsell is the publisher of Future Tense Books and also works at Powell’s City of Books in Portland, Oregon. His books include the short story collections, “Beautiful Blemish” (Word Riot) and “Creamy Bullets” (Chiasmus), the anthology, “Portland Noir” (Akashic) and the memoir, “A Common Pornography” (Harper Perennial). His stories and nonfiction have appeared in print and online through The Associated Press and in places like Nerve, Smith Magazine, McSweeney’s, Hobart, Sleepingfish, Elimae, Keyhole and Yeti. More about Kevin at kevinsampsell.com. 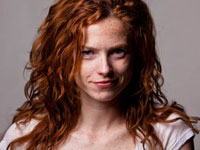 Rachel Flotard owns Local 638 Records in Seattle, Washington. She is the songwriter and front-woman for the rock band Visqueen. Rachel often appears with her side project Rusty Willoughby’s Cobirds Unite, as well as contributor to the recordings of Neko Case, Jon Rauhouse and Maggie Bjorklund. Rachel is currently writing music for an upcoming LP in 2012.