Join Robin McLean and Margot Kahn Case for an online reading and conversation. 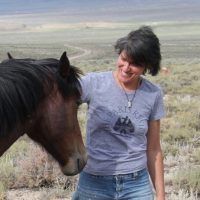 About the Robin McLean

Robin McLean worked as a lawyer and then a potter in the woods of Alaska before turning to writing. Her story collection Reptile House won the 2013 BOA Editions Fiction Prize and was twice a finalist for the Flannery O’Connor Short Story Prize. She now lives and teaches in the high plains desert of central Nevada at Ike’s Canyon Ranch Writer’s Retreat which she co-founded.

A figure skater first—having learned to skate and walk at the same time—McLean believes that crashing on ice prepared her for writing fiction. Besides writing, her careers and interests have been diverse: pushcart hotdog sales, lawyer and mediator, potter and tile maker, political activist, union organizer, sculptor, haunted corn maze manager as well as zombie trainer (yep).

Read a review of Pity the Beast in the Guardian.

Margot Kahn Case is the author Horses That Buck (University of Oklahoma Press, 2008), winner of the High Plains Book Award, and A Quiet Day with the West on Fire (2021), finalist for the Floating Bridge Chapbook Award. She is co-editor, with Kelly McMasters, of two anthologies: the New York Times Editors’ Choice anthology This Is the Place (Seal/Hachette, 2017) and Wanting (Catapult, 2023).

Margot’s poems have appeared in Whiskey Island, Grist, Portland Review, Poetry Northwest, New England Review, New Ohio Review, and elsewhere. Her poem “Winter” was selected by Jericho Brown as the winner of the Crab Creek Review 2019 Poetry Prize. Her essays and reviews have appeared in The Rumpus, Lenny Letter, BUST, and Publishers Weekly, among other places. Her work has been anthologized in YOU: An Anthology Devoted to the Second Person (Welcome Table Press), Pie & Whiskey: Writers Under the Influence of Butter & Booze (Sasquatch Books) and Evergreen: Grim Tales and Verses from the Gloomy Northwest (Scablands Books).

Recipient of a Hertog Fellowship from Columbia University and winner of the Ohioana Library Association’s Walter Rumsey Marvin Grant, Margot holds an MFA from Columbia University and has been supported by individual artist awards and residencies from Artist Trust, 4Culture, the Seattle Mayor’s Office of Arts & Culture, Bread Loaf and the Jack Straw Writers Program. She is the director of education for Hugo House, Seattle’s community writing center, and lives in Tacoma with her husband and son.