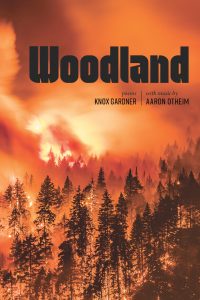 Join us as we celebrate the launch of Woodland, a book of poetry and music by Knox Gardner and Aaron Otheim.

Started during the early season fires of 2017 in British Columbia, written that burning year, and finished as the Camp Fire obliterated Paradise, California, the poems and music of Woodland blaze with anger. Broken and obsessive, lathing logging terminology and archaisms, the poems ricochet around the new reality of endless fires as the Climate Catastrophe unfolds and “lover & spruce/ rise up the mountain/ contorted/ for cooling/ air—”.

The book includes a new “score” by keyboardist Aaron Otheim. Burning the 19th-century parlor music of Edward MacDowell’s Woodland Sketches, Otheim fractures the recognizable melodies of this arch-romantic work with both studio and post-recording manipulation to create a startling and darkly timbred composition

Aaron Othiem, whom you may know from his work with the Cafe Racer Series, returns from Los Angeles, in what will likely be the only chance to hear the score played live. Erin L. McCoy joins Knox Gardner to perform poems from the book.
+ Google Calendar+ Add to iCalendar