Ted Chiang, one of the most influential science-fiction writers of his generation, has won 27 major awards in the genre including four Nebula awards, four Hugo awards, and four Locus awards. His short story “Story of Your Life” was the basis of the film Arrival.

New York Times-bestselling writer Karen Joy Fowler is the author most recently of We Are All Completely Beside Ourselves, which won the PEN/Faulkner Award for fiction and was short-listed for the 2014 Man Booker Prize. 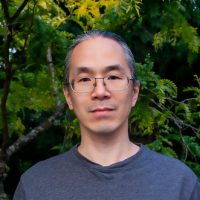 Ted Chiang was born in Port Jefferson, New York, and holds a degree in computer science. In 1989 he attended the Clarion Science Fiction and Fantasy Writer’s Workshop. His fiction has won four Hugo, four Nebula, and four Locus awards, and he is the recipient of the John W. Campbell Award for Best New Writer and the Theodore Sturgeon Memorial Award. Stories of Your Life and Others has been translated into ten languages. He lives near Seattle, Washington.